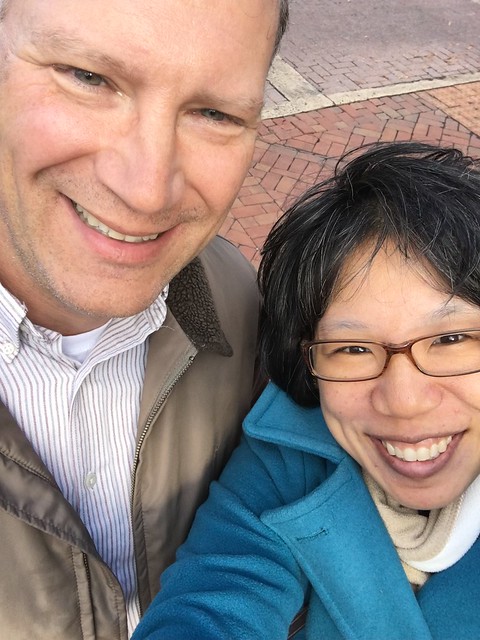 I met up with Andy for lunch today.  We went to Jimmy Johns – my favorite sandwich place.  I like to get the roast beef and then put potato chips into the sandwich and eat it all together.  Crunch, crunch, crunch.  We talked a lot about horses and cinematography.  Also books!  I met Andy through an online book club.  Andy reads a lot of books (probably more than one a week), but he’s a book thrifter, so I can’t resist getting him new-ish books that I think he might like.  This time I got him Thinking Fast and Slow by Daniel Kahneman and Ready Player One by Earnest Cline.  I’ve read neither – though Jeremy loved Thinking Fast and Slow and Ready Player One is being made into a movie by Steven Spielberg for release in 2018.

Vince got his new, fancy to him (though still not fancy in the world of fancy violins and bows), carbon fiber violin bow.  When I told Bob that Kelly (Vince’s violin teacher) told me that Vince’s old bow wasn’t worth rehairing, he was shocked.  Shocked!  I forget what Bob said exactly, but it was something like – that’s like giving away the dog when he needs a good grooming. 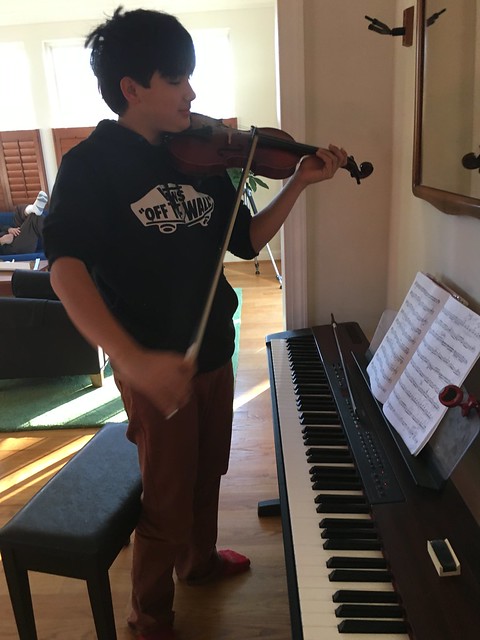 This term, though a slog as it always is midway through any term, is going well for Vince.  He’s really tracking his assignments much better, he’s preparing for tests, he’s following rubrics.  It’s so much better than last term, though exhaustion does set in for both him and me.  I’m trying to go incrementally and not demand perfection which is my tendency and which is not Vince’s tendency. There are pros and cons to each approach, I see how trying to perfect things led me to lots of heartache and grief.  There is a sweet spot in there, trying hard but not too hard. Now comes the real challenge for Vince to manage.  It’s the challenge of writing your paper on the laptop and then not getting sucked into the vortex of the internet.  This is the productivity trap we all suffer from.  I told him my tricks, the main one being the 20 min on, 5 min off trick (which I’ve now learned is called the pomodoro technique).   Twenty min of focused concentration and then a 5 min break set with a true timer or stopwatch.  I did this way back in college when I’d study two days for every exam.  Hours and hours in the library and the internet didn’t even exist back then.  My 5 min break would be sneaking (who was I sneaking from?  myself?  I’m ridiculous.) upstairs to the 2nd floor where the MIT library inexplicably had a subscription to People Magazine. I felt so efficient back then.  I’m much less efficient now.  I can tell when I try to study this second time around, my brain is sloppier and clumsier.  It’s less certain with twirling the information around like a baton aflame and throwing it up in the air and catching it behind my back with my eyes closed.  I can do it, but I drop it more often on the floor than I used to.