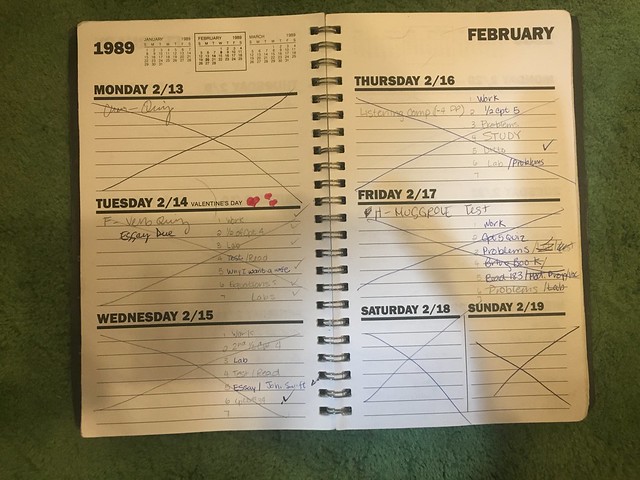 I found my high school junior year calendar.  (When I work in the hospital, I lose track of all things that go on outside – then I come home and Jeremy asks, did you hear what happened today?  And I’m like – of course I haven’t heard and then we launch into the upsetting twilight zone that is the United States which now somehow involves handwritten high school calendars).  It’s interesting to flip through my own calendar and seeing my old handwriting knowing that Vince is in his junior year now 30 years later.  The most interesting thing I found was this: 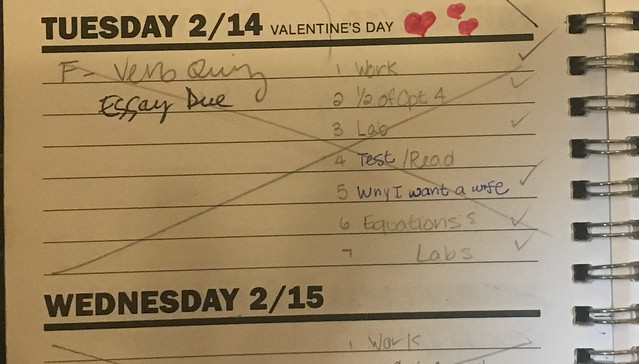 On Valentine’s Day in 1989, I was supposed to read for English class “Why I Want a Wife” which must be referencing – the “I Want A Wife” essay that appeared in the inaugural issue of Ms. magazine.  I’m pretty sure I think I didn’t think anything of it at the time, but now I want to remember who the English teacher was who taught the class.  I found her name, but I can’t recall anything about the class.  I think it’s an appropriate juxtaposition – the essay was written in 1971, I read it in 1989, now it’s 2018 and we are all still, unbelievably, at it.  I’ve been very lucky as a woman.  Somehow I’ve been free of harassment and mistreatment by men.  My old boyfriends?  All good guys.  I have had almost no trouble with my relationships with men, but with women, especially in groups of women when I was younger, I have had trouble figuring out how I was suppose to act or what I was suppose to do.  Which is why this go around at the hospital has been extremely reassuring from a female group dynamic kind of way.  Of course, most of the nurses on the floor are female and as I transitioned to the floor on my own, I was worried that I’d be on my own that my old, expected patterns of awkward female group interactions would still hold true for me, but it’s not the case.  I found a gem of a unit.  All the nurses go about their day, passing each other all day and everyone asks – are you OK?  did you eat?  did you take a break?  In my youth, I’d be embarrassed to ask so many questions.  But now, it’s no joke, I need to ask the questions to know how to take care of people – I ask questions all the time and I’m not embarrassed.   There is a saying in nursing that “nurses eat their young” referring to a tradition of hazing of new nurses, but I’m not experiencing it.  I did cry in the middle of my shift on Tues.  I have often felt like crying at the hospital, but I’ve never actually cried, but I did on Tues.  Nothing terrible was happening, but I was just overwhelmed.  My charge nurse took one look at me and said – go take a break, I’ll get your new patient settled in and it’ll be fine.  Come back in 30 minutes.  So I did and it was fine.

One thought on “HS calendar.”